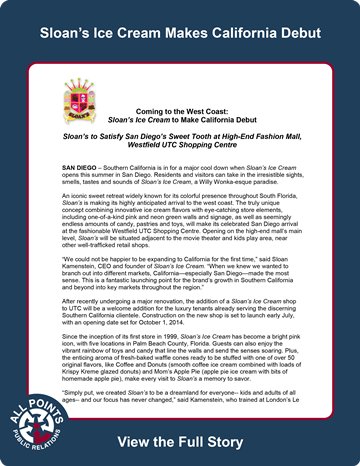 Coming to the West Coast:

SAN DIEGO – Southern California is in for a major cool down when Sloan’s Ice Cream opens this summer in San Diego. Residents and visitors can take in the irresistible sights, smells, tastes and sounds of Sloan’s Ice Cream, a Willy Wonka-esque paradise.

An iconic sweet retreat widely known for its colorful presence throughout South Florida, Sloan’s is making its highly anticipated arrival to the west coast. The truly unique concept combining innovative ice cream flavors with eye-catching store elements, including one-of-a-kind pink and neon green walls and signage, as well as seemingly endless amounts of candy, pastries and toys, will make its celebrated San Diego arrival at the fashionable Westfield UTC Shopping Centre. Opening on the high-end mall’s main level, Sloan’s will be situated adjacent to the movie theater and kids play area, near other well-trafficked retail shops.

“We could not be happier to be expanding to California for the first time,” said Sloan Kamenstein, CEO and founder of Sloan’s Ice Cream. “When we knew we wanted to branch out into different markets, California—especially San Diego—made the most sense. This is a fantastic launching point for the brand’s growth in Southern California and beyond into key markets throughout the region.”

After recently undergoing a major renovation, the addition of a Sloan’s Ice Cream shop to UTC will be a welcome addition for the luxury tenants already serving the discerning Southern California clientele. Construction on the new shop is set to launch early July, with an opening date set for October 1, 2014.

Since the inception of its first store in 1999, Sloan’s Ice Cream has become a bright pink icon, with five locations in Palm Beach County, Florida. Guests can also enjoy the vibrant rainbow of toys and candy that line the walls and send the senses soaring. Plus, the enticing aroma of fresh-baked waffle cones ready to be stuffed with one of over 50 original flavors, like Coffee and Donuts (smooth coffee ice cream combined with loads of Krispy Kreme glazed donuts) and Mom’s Apple Pie (apple pie ice cream with bits of homemade apple pie), make every visit to Sloan’s a memory to savor.

“Simply put, we created Sloan’s to be a dreamland for everyone– kids and adults of all ages– and our focus has never changed,” said Kamenstein, who trained at London’s Le Cordon Bleu culinary school, as well as in a variety of kitchens throughout France. “The time has come to share Sloan’s yumminess beyond South Florida.”

Kamenstein has no doubt that growth into California, specifically in San Diego’s Westfield UTC Shopping Centre, is the next phase in continuing to bring Sloan’s Ice Cream shops to desirable venues nationwide for more of America to enjoy.

“It’s about taking the next step in creating a successful brand,” Kamenstein said. “We’ve been privileged to serve South Florida for a long time, and we feel equally as fortunate to bring the same level of distinction to Southern California. San Diego is just the first of many locations on the West Coast and nationwide. We plan on opening many more.”

In addition to this opening, Sloan’s Ice Cream is poised for nationwide expansion through its well-planned franchising initiative, which calls for adding 200 franchise units in the next five to seven years. Given the uniqueness of the luxury dessert concept, Kamenstein and his leadership team recently launched the franchising program with a specific target on the most attractive U.S. markets, including additional regions in Florida, and throughout California, New York and Texas. Growth into additional regions is also being pursued. The first franchise location opened in 2013 in Delray Beach, Fla.

Celebrating its 15th anniversary, Sloan’s is fully equipped to share its proven operational, marketing and management systems with qualified franchise investors to which it awards agreements. Ideally suited for experienced restaurant, retail and hospitality franchise investors, as well as husband and wife teams and multi-generational investment groups, Sloan’s has demonstrated a track record of achievements in every economic climate.

A true icon of South Florida, Sloan’s is renowned for its award winning luxury ice cream flavors, candies and world-class bakery items. The brand’s signature pink walls and ceilings, along with the plush toy collection lining its walls add to Sloan’s fun, funky experience, which includes magical glass bathroom doors. In 1999, Sloan Kamenstein, a classically trained chef and ice cream connoisseur, created Sloan’s along West Palm Beach, Florida’s famed Clematis Street. Under his guidance, the brand has grown to four locations in West Palm Beach, Palm Beach Gardens and Boca Raton. In mid-2012, Sloan’s began franchising with qualified operators and investors to strategically grow the brand and share more of its magic with a growing national and international following.