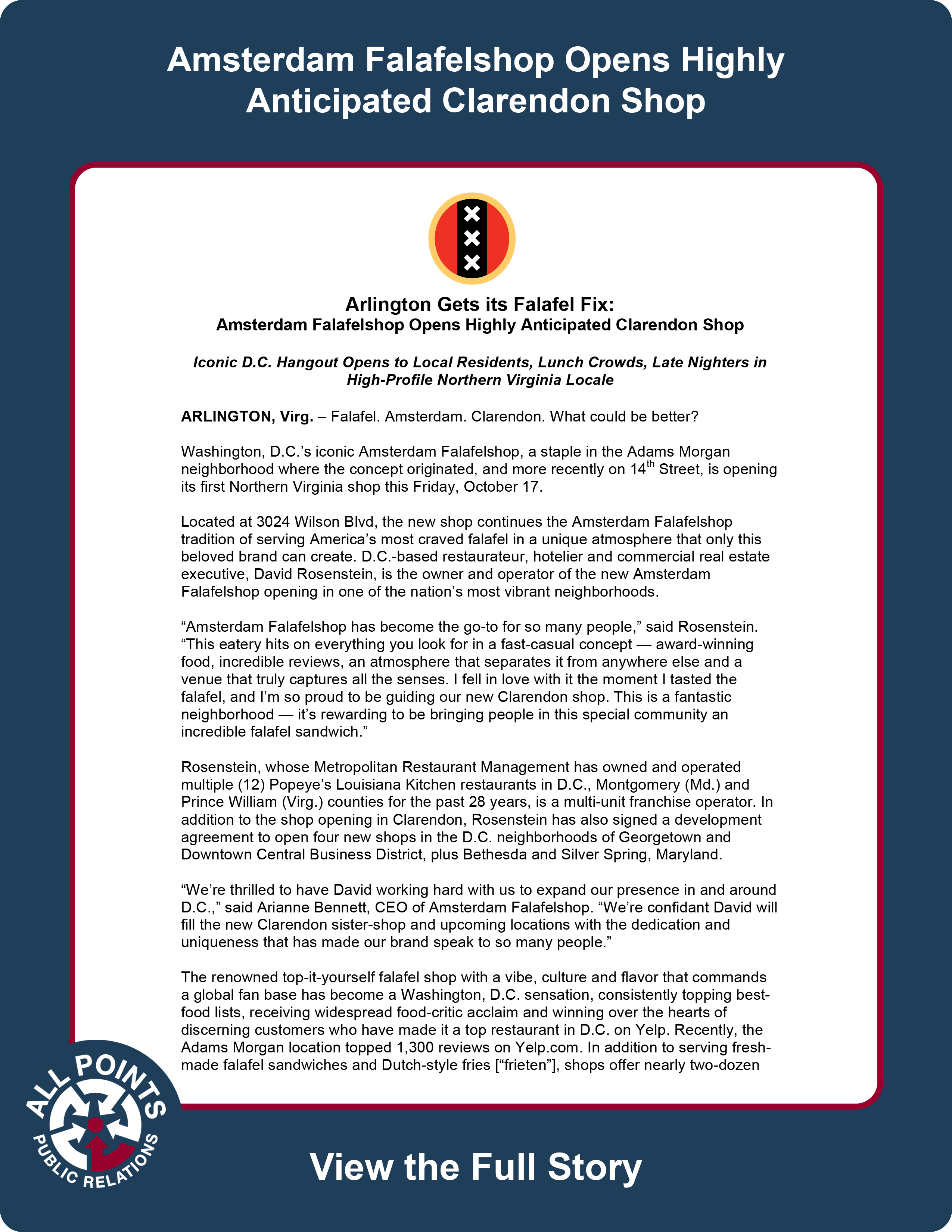 ARLINGTON, Virg. – Falafel. Amsterdam. Clarendon. What could be better?

Washington, D.C.’s iconic Amsterdam Falafelshop, a staple in the Adams Morgan neighborhood where the concept originated, and more recently on 14th Street, is opening its first Northern Virginia shop this Friday, October 17.

Located at 3024 Wilson Blvd, the new shop continues the Amsterdam Falafelshop tradition of serving America’s most craved falafel in a unique atmosphere that only this beloved brand can create. D.C.-based restaurateur, hotelier and commercial real estate executive, David Rosenstein, is the owner and operator of the new Amsterdam Falafelshop opening in one of the nation’s most vibrant neighborhoods.

“Amsterdam Falafelshop has become the go-to for so many people,” said Rosenstein. “This eatery hits on everything you look for in a fast-casual concept — award-winning food, incredible reviews, an atmosphere that separates it from anywhere else and a venue that truly captures all the senses. I fell in love with it the moment I tasted the falafel, and I’m so proud to be guiding our new Clarendon shop. This is a fantastic neighborhood — it’s rewarding to be bringing people in this special community an incredible falafel sandwich.”

Rosenstein, whose Metropolitan Restaurant Management has owned and operated multiple (12) Popeye’s Louisiana Kitchen restaurants in D.C., Montgomery (Md.) and Prince William (Virg.) counties for the past 28 years, is a multi-unit franchise operator. In addition to the shop opening in Clarendon, Rosenstein has also signed a development agreement to open four new shops in the D.C. neighborhoods of Georgetown and Downtown Central Business District, plus Bethesda and Silver Spring, Maryland.

“We’re thrilled to have David working hard with us to expand our presence in and around D.C.,” said Arianne Bennett, CEO of Amsterdam Falafelshop. “We’re confidant David will fill the new Clarendon sister-shop and upcoming locations with the dedication and uniqueness that has made our brand speak to so many people.”

The renowned top-it-yourself falafel shop with a vibe, culture and flavor that commands a global fan base has become a Washington, D.C. sensation, consistently topping best-food lists, receiving widespread food-critic acclaim and winning over the hearts of discerning customers who have made it a top restaurant in D.C. on Yelp. Recently, the Adams Morgan location topped 1,300 reviews on Yelp.com. In addition to serving fresh-made falafel sandwiches and Dutch-style fries [“frieten”], shops offer nearly two-dozen toppings for patrons to customize their falafel. These unique differentiators inspired Rosenstein, who couldn’t resist the opportunity to expand with Amsterdam Falafelshop.

“We’ve created a movement that reflects our quirkiness, and we’re incredibly excited that we found David. He’s a great partner for growing our brand,” added Bennett. “You will not find a restaurant concept with the food and environment that we offer in this area — we are confident the Clarendon sister-shop will make a huge and lasting imprint in the fast casual food market there.”

In addition to growing in D.C., Virginia and Suburban Maryland, Amsterdam Falafelshop is moving forward with an aggressive U.S. franchise growth plan calling for expansion into other select urban centers where the brand can maintain its originality among a diverse collection of consumers. The company is still accepting applications from qualified franchisees interested in further developing key U.S. areas throughout the Northeast, Eastern Seaboard, Midwest and Southeast. Target markets include the Washington D.C. metro area and Baltimore, Atlanta, the Carolinas, Miami, Tampa, the New York metro area, Philadelphia and Richmond. Plus, Amsterdam Falafelshop has also pinpointed metropolitan areas across the midsection of the nation such as Chicago, Ohio, and other major metro markets in Texas.

There are two Amsterdam Falafelshop franchise locations currently operating outside of D.C. — one in Boston and another in Annapolis, Md. Additionally, there are new locations planned for the Boston, Salt Lake City and Dallas-Fort Worth markets.

Since opening in 2004 in the heart of Washington, D.C.’s Adams Morgan neighborhood, Amsterdam Falafelshop has become a magnetic destination. The top-it-yourself falafel sandwich and Dutch-style fries shop with a vibe and culture tailored to meeting the taste and atmospheric demands of urbanites nationwide creates an unforgettable, unique experience in every community it enters. Shops retain a feeling of neighborhood independence amid a period of crucial franchise growth. With three locations operating today and multiple units in development, plans call for an exponential increase in franchised sister-shops, adding dozens of Amsterdam Falafelshop franchise locations across urban centers nationwide. For more information about the restaurants, please visit www.Falafelshop.com. To learn about available franchise opportunities, click on the website’s “Franchise Opportunities” tab.